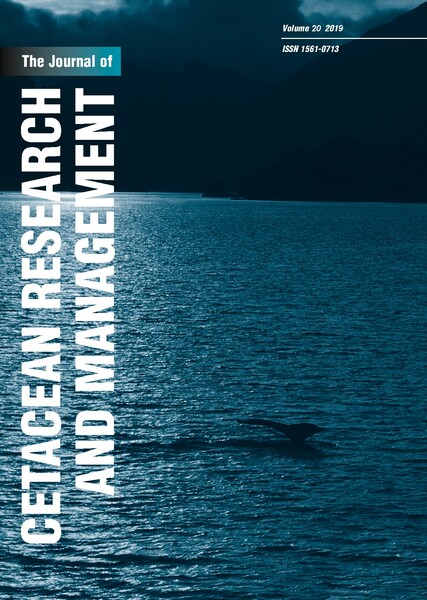 Cetaceans were observed off the South coast of Sri Lanka in the month of April, every year over a seven-year period, 2007–13. During 48 days at
sea a total of 290 cetacean sightings were recorded. Blue whales were abundant, accounting for 61% (n = 177) of all sightings. This concentration
of blue whales was predicted and discovered based on a migration hypothesis and there was evidence of the expected net westward movement in
April. Nevertheless, most blue whales seen were not obviously on passage and many appeared to be feeding. Mothers with calves and likely
reproductive behaviour (breaching and rushing) were also observed. There were five sightings of Bryde’s-type whales (B. brydei/edeni); four were
identified as B. brydei, one was identified as B. edeni. Sperm whales were sighted 16 times within a narrow band centred just outside the 1,000m
isobath. Modal group size was 10–12; based on size most individuals appeared to be mature females or immatures. Spinner dolphin (n = 35 sightings)
was the most abundant species, accounting for 67% of all cetaceans seen by number of individuals. They were frequently associated with tuna and
seabirds. Risso’s dolphin was only seen once, despite being reported as common around Sri Lanka in the early 1980s. They were taken in large
numbers by local fisheries, which may have reduced local abundance. Other species recorded were: dwarf sperm whale (n = 3 sightings); shortfinned pilot whale (n = 3); common bottlenose dolphin (n = 9); Indo-Pacific bottlenose dolphin (n = 3); pantropical spotted dolphin (n = 4); and
striped dolphin (n = 4). Since the discovery of blue whales off southern Sri Lanka, commercial whale watching centred on the fishing port of Mirissa
has developed rapidly, bringing new revenue to the region but also the potential for disturbance to the whales